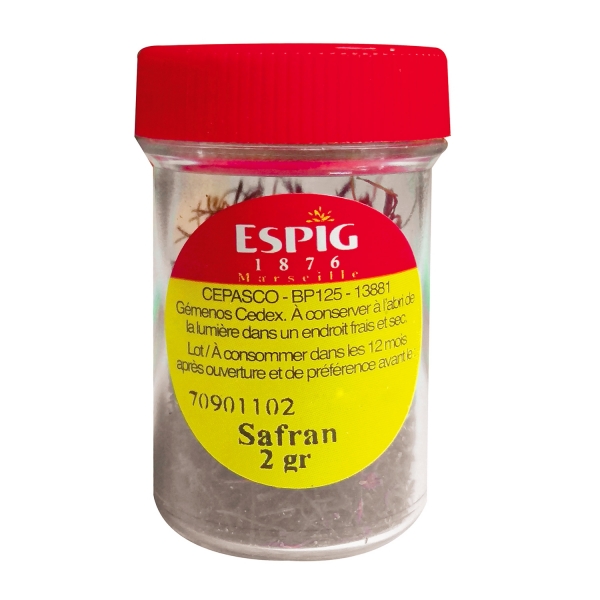 Threads of saffron, a spice popular in Indian recipes for its qualities of fragrance and coloration.
Sold in packs of 2g

Saffron is a spice derived from the stigmas of a crocus flower. Its culture is originally from India. India is still a leading producer of saffron and spices from Kashmir, purple-brown, is among the darkest in the world, which gives very intense fragrance, flavor and tinting.
In India it is called Kesar (Hindi), and gives its name to a color, Kesari. It is sold in stores in a box like a jewelry box: the jewel of the kitchen. It's the spice with the the highest price per kilo in the world, it needs more than 150 flowers to give 1 g of saffron.

How to Use Saffron

Saffron is used in Indian cooking for its bitter taste and also for the yellow gold it brings. It may be added in the preparation of a curry, for example, or the recipe of Biryani rice. It is also used in sweet dishes like gulab jamun, kulfi, an Indian ice cream, lassi, an Indian drink made from yoghurt or in Indian cream. It can be soaked in water and then added to dishes. We can also heat a few strands and then ground to a powder to add to dishes.
Do not confuse it with turmeric, known as Indian saffron, which also gives a strong yellow coloring powder.

Saffron contains carotenoids and is also an antioxidant. It gives great color and fragrance.